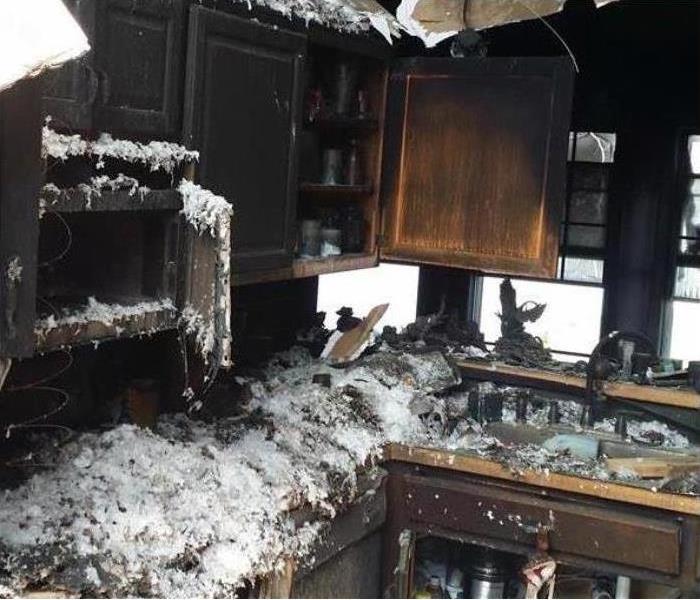 We are ready to respond to your call 24/7, and we’re faster to any size disaster. We have the training, equipment, expertise needed.

Even a small scale fire in your home can leave behind an astounding level of fire damage to clean up. Of all the types of fires that get an improper cleanup, one of the most common is the protein fire, or more commonly known as, "Oops, dinner burned."

SERVPRO answered a call to mitigate a protein fire damage in a Little Rock kitchen, and there was very little evidence of the fire left, except for the pungent odor because the homeowner cleaned away the visible evidence of the fire, but his attempts at getting rid of the smell of a burned roast remained. This happens because during a fire as hot air expands, it forces odor-causing particles into porous objects and removal requires professional restoration services and odor control methods.

Our team members hold certifications as Fire and Smoke Damage Restoration Technicians. We know how to turn around fire loss of any size in a home with our techniques and equipment. Even though a short time had passed since the fire damage, we contained the kitchen and covered the vents to stop any further spread of odor in the home. Protein fires do not appear to have a lot of smoke damage, because the residue is nearly invisible. Using wet sponges, we hand-cleaned all exterior surfaces in the kitchen to get every trace of the hard-to-see film left behind.

Air scrubbers with HEPA filtration are highly useful pieces of equipment for removing airborne soot particles. Each fire odor removal site is different; however, the science of odor control is finite. When deep cleaning surfaces and raising the air quality in the fire loss area do not remove the odor, stronger methods such as thermal fogging tend to bring positive results as it mimics the fire and sends a heated, deodorizing solvent to eradicate embedded soot. Hydroxyl generators are another go-to machine that safely neutralizes smoke odors at the molecular level.

When the odor from fire damage does not go away, call SERVPRO of Northwest Little Rock at (501) 803-9700. Our certified technicians are ready 24/7 to mitigate fire loss in your home and make it "Like it never even happened."